Dedicated to family like Tony Soprano, quick-witted as Dean Martin; fourth generation baker Buddy Valastro, the Cake Boss, keeps reinventing himself like crooner Tony Bennett. Even as the Cake Boss expands his sweet Carlo’s Bakery empire, the cakes, cookies, cannoli and lobster claws sold remain as classic as the tunes of Frank Sinatra.

Even before this Italian-American baker landed his own show on the TLC channel, I was a Cake Boss fan. Buddy would make appearances on the Food Network and I was awe-struck by his confidence. And his cake decorating ability! Flipping through bridal magazines, I would simply sigh as glossy page after page showed off lace, beading and draping work, which rivaled the haute couture wedding gowns!

When the lovely ladies who handle promotions for Buddy Valastro’s ever burgeoning bakeware line kindly sent me the Cake Boss Cast Iron Decorating Turntable, you can imagine this Ninja Baker was rather thrilled. With a shiny silver top and a bright red base, only a cake befitting such a stand would do. 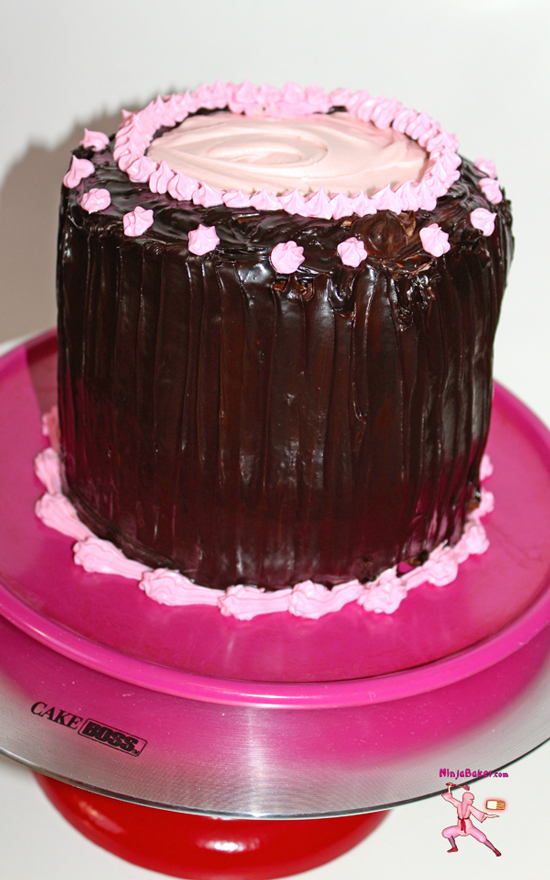 Despite juggling must-dos, with a few timesaving tricks I still turned out a 3-layer chocolate cake that was greeted with oos and ahs. Oh, by the way, I did carve out time to watch this Buddy Valastro event on Facebook. (You can still see the very instructive decorating how-to at Cake Boss Baking.) As Buddy’s uber-talented daughter dressed up Cake Boss Cakelettes like a professional decorator, I had to keep repeating my mantra, “Stay in your own lane. Stay in your own lane.” 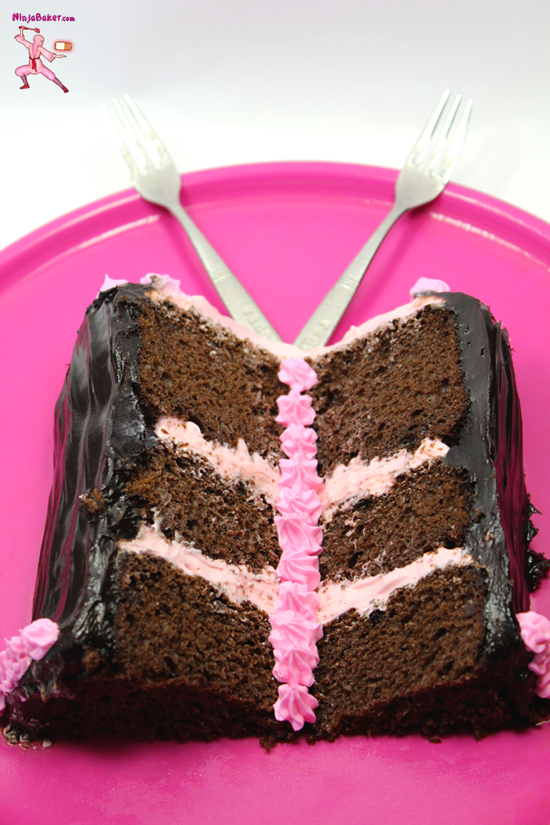 Among other tips, I learned both Buddy and his daughter are fans of the #4 and #16 cake decorating tips. (Pun intended! Sorry, I couldn’t resist.) Well, practice makes perfect: this Ninja Baker set out to place a few pink star flowers on her 3-layer chocolate cake. While I didn’t skimp on decorating time, I did engage in a few Ninja timesaving strategies.

1. I used a chocolate cake mix. But, to add a bit of oomph to the flavor, I substituted milk and Japanese plum wine for the water. I cannot claim the same “spectacularness” found in homemade Carlo’s Bakery-style chocolate cake, the milk and wine do seem to punch up the chocolate flavor.

2. As I have a smallish oven, in order to bake up the cakes in one go, three 6’’ cake pans were employed.

3. For the frosting, I used the canned kind. But I drizzled in Japanese plum wine (and pink food coloring.) To compensate for the extra liquid I sprinkled in powdered sugar. (It’s a good thing I am busy. If left with time on my hands the remaining frosting in the mixing bowl may have landed in my stomach instead of soap and water.) The contrast of alcohol and sugar do create a spellbinding sensation on the palate. (If you have kidlets, you can always use a tart cherry juice.)

If minutes are on your side the Ninja Baker’s Japanese Plum Wine Frosting made from scratch is pretty darn yummy, too.

4. This next ninja tip may not seem like a timesaver but it is! After your layers of baked chocolate cake have cooled, place them in the freezer. Ideally, overnight. Frosting is oh, so much easier to spread over firm cake. How can this be timesaving? Because you won’t be picking out chocolate crumbs out of your frosting.

5. Final ninja note: Get elevation…For example, a Cake Boss Decorating Turntable. Decorating is sooo much easier (and more comfortable) when one is not stooped over dramatically like the Hunchback of Notre Dame. 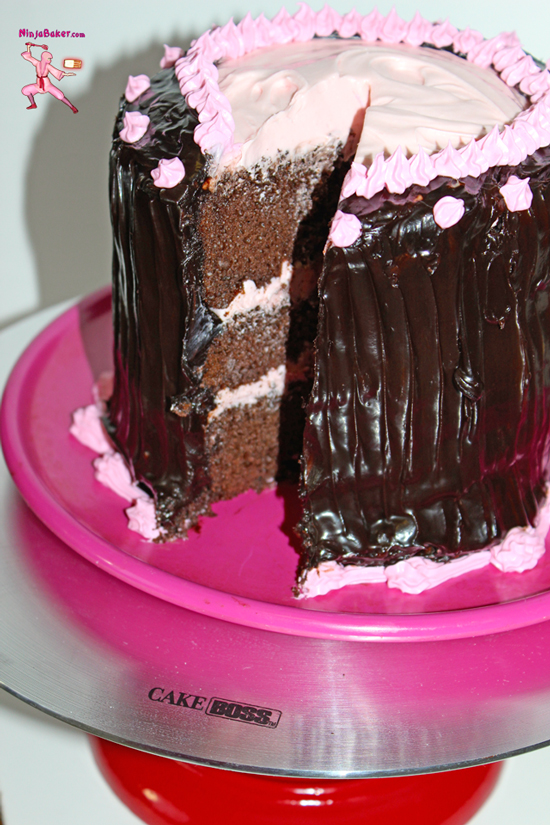 The Cake Boss serves up the best chocolate goodies at Carlo's Bakery
but the Ninja Baker's 3-layer chocolate cake will do in a pinch.

Wishing you the time to bake up days that bring you contentment and success!