The year was 1975. Heaven’s winds had blown away the cherry blossoms of March and April in Japan. Wispy lilac wisteria waved and fragrant full-petaled roses bloomed on light May breezes. To top off the excitement of spring, Queen Elizabeth was visiting Tokyo! In her Sunday best, the white-gloved royalty planted an oak sapling as a gift from Great Britain at (the former) Emperor Hirohito’s Akasaka Palace (built in the style of Louis XIV’s Versailles.) 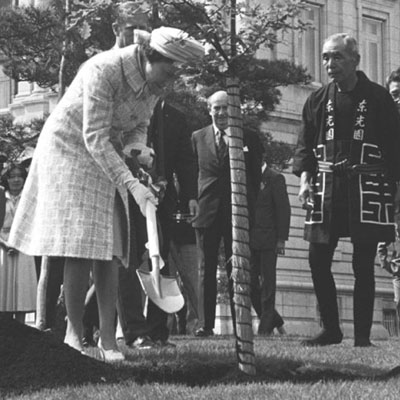 Queen Elizabeth planting the gift of an oak sapling in front of the
former Japanese Emperor's residence.
(The palace now serves as a guest house for visiting dignitaries.)

Later, a red carpet was rolled out and Queen Elizabeth gave a speech. Despite the differences in the customs and cultures of the East and the West, she focused on the similarities: Both countries are island nations with monarchies. As I recall, Queen Elizabeth emphasized understanding the feeling of isolation and being part of a dying breed of royalty. Not exactly freedom and justice for all. However, her visit cemented my fascination with princesses and castles. Great Britain is a great spot on the globe for finding such things. (The enchantment of the British Isles was further fostered with the introduction of the plays and sonnets of William Shakespeare.) 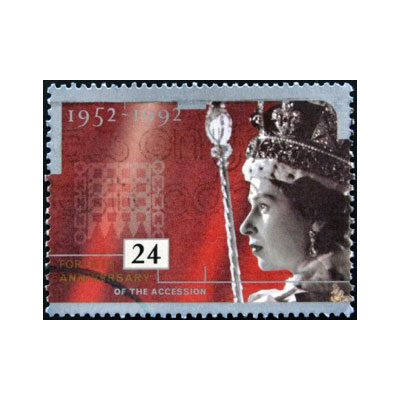 So, I was over the moon when I visited London for the first time in my 20s. (At this writing I’ve made the jump over the pond six times.) Buckingham Palace, the changing of the guard, daily matinees at the theatres in the West End – I was in heaven! And, oh, my first bites of scones sent me into a happy dance. 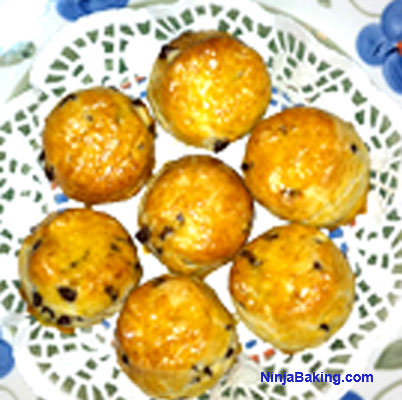 Scones with Chocolate Chips
Click here for the recipe.

I’m sharing the joy via my British Bento starring scones filled with almond butter at today’s #SundaySupper event at Twitter. (Scroll down for the details.) The theme of this virtual chat is lunch boxes and meals to go. Our hostess is Liz Berg of That Skinny Chick Can Bake. She is one maestro in the kitchen. Her plaited Easter bread and crêpes are exquisite examples. She even makes a brownie appear gourmet! 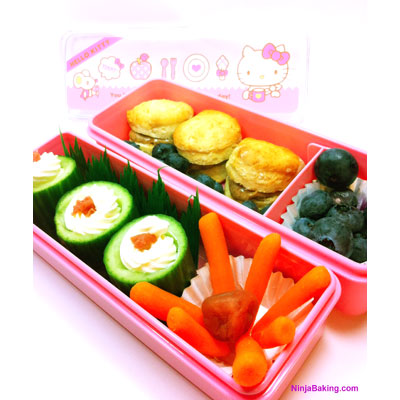 The Ninja Baker's British Bento
Into the scones, slather almond butter. Sprinkle in a handful of blueberries.
Scoop out the middles of English cucumbers, swirl in whipped cream cheese.

A tiny bit of pickled plum crowns the cucumbers as well as the baby carrots.

Although my contribution may not exactly be the most elegant lunch-to-go, it is tasty! To assemble the Ninja Baker’s British Bento, you’ll need to make mini scones. 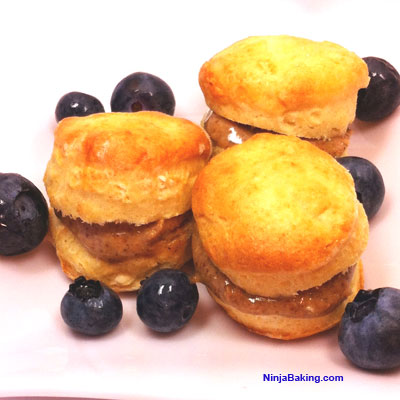 These little gems are adapted from British celebrity chef, Mary Berry’s Baking Bible.  Slightly less sweet than other scone recipes in my collection, these are perfect for tucking in lunch meats.  Or enjoying with a bit of almond butter and a sprinkle of blueberries.

In a large bowl, whisk together the flour and baking powder. With a pastry cutter or your fingers, mix in the butter until the mixture looks like panko breadcrumbs. Add the sugar with a spatula.

Lightly beat the eggs in a 4-cup measuring cup. Pour in the milk until the 1-cup mark is reached.

Add the egg-milk to the flour-butter mixture. Combine well. The dough will be sticky. (Disposable plastic gloves are helpful.) Turn it out onto a floured board. Flatten with your hands or floured rolling pin to 1 to 2 cm (½ to ¾ inches.)

Bake the mini scones for 9 to 10 minutes or until golden brown.

And remember that we have a #SundaySupper chat at 7 PM each on Sunday evening. We tweet throughout the day using the hashtag #SundaySupper, then we all gather to share ideas, recipes and answer questions from 7-8 PM ET. Check out our #SundaySupper Pinterest Board for more fabulous recipes and food photos. 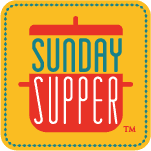