Recipes men love is the Twitter chat around today’s #SundaySupper table. (You are definitely invited! Please scroll down for the details.)  As my husband, David, is the man I love, I’m contributing his favorite food  - vegan fare! Specifically, Chunky Monkey Vegan Banana Bread. (Based on the famed Chunky Monkey banana ice cream sprinkled with bits of dark chocolate and walnuts.)


As delightful as Chunky Monkey Vegan Banana Bread is to David; FOX TV's Bones fans delight in David's artistic gifts. He’s the creative genius behind the computer and Angelatron graphics on the show. My Renaissance man husband is talented and smart. (He tested two points below genius on an IQ test!) However, what I appreciate most is his huge heart. One example: During Christmas break, he suggested that we drive around Santa Monica handing out cash to those in need.

A soft cake-like crumb and lots of melted chocolate await in every slice of
Chunky Monkey Vegan Banana Bread.


You can see why I’d want to bake up something special for this special man in my life. I found this Chunky Monkey Vegan Banana Bread here at the Peaceful Dumpling. The recipe looked dee-licious! However, it isn’t gluten-free and David shies away from wheat. Despite the warnings of the proprietor at Peaceful Dumpling not to substitute anything, this Ninja Baker sneaked in a rice flour blend for the all-purpose kind. (I also added a few extra chocolate chips.)

Banana bread for the beloved vegans in your life.


The result? My opinion? Not grrreat. But the gluten-free, soy free, nonGMO fantabulous Chocolate Dream chips saved the day. (Bless the magical wonders of chocolate!) The chips mask the slightly ricey flavor. David, however, liked my version of Chunky Monkey Vegan Banana Bread. Here’s a snippet of our conversation after I made his favorite very non-vegan eggs (sprinkled with diced onions and scrambled with splashes of soy sauce and dots of olive oil.)

David:  “Can I have a slice of the banana bread?”
The Ninja Baker: “Sure, just remember I still have to take pictures for the blog.”

Minutes later after checking e-mails, I waltzed into the kitchen ready for a Chunky Monkey Vegan Bread photo shoot. Here’s what I found:

Ready to slice up and reveal some Chunky Monkey vegan goodness.


This Chunky Monkey Vegan Banana Bread is highly recommended for those who are or have loved ones with food sensitivities. If not, go for the real thing. I highly recommend this recipe. 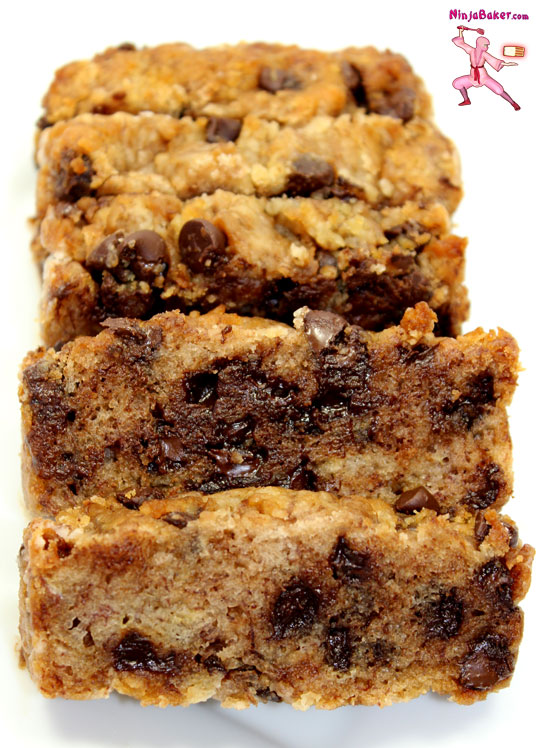 Sensitive to wheat? Dairy? Any products with animals? And LOVE sweets? This Chunky Monkey Vegan Banana Bread is created with love just for you!

Tip: If possible buy Chocolate Dream chips...The guys who recommended them to me at Whole Foods were right about the uber-deliciousness of the dairy free, soy free, nonGMO, gluten-free chocolate chips!

This Chunky Monkey Vegan Banana Bread is adapted from a recipe at Peaceful Dumpling.

Preheat the oven to 375 degrees.

Whisk together the flour, sugar, baking powder, baking soda and salt in one large bowl.

In a separate bowl, mash the bananas with the lemon juice and coconut oil. (A potato masher is a brilliant tool for smushing bananas.)

Add the banana mixture to the flour bowl. Combine well but do not over mix. (You want a tender loaf of bread. Not a tough one.) Gently stir in the chocolate chips.

Bake for 35 minutes or until a toothpick plunged into the centers comes out clean.

Enjoy more recipes created for the special men in the lives of the #SundaySupper crew:

Join the #SundaySupper conversation on twitter on Sunday! We tweet throughout the day and share recipes from all over the world. Our weekly chat starts at 7:00 pm ET. Follow the #SundaySupper hashtag and remember to include it in your tweets to join in the chat. Check out our#SundaySupper Pinterest board for more fabulous recipes and food photos.

Our #SundaySupper at Twitter is hosted today by Susan of Girl in the Little Red Kitchen. She is one talented baker and is looking for backers to kickstart her online (preservative free) cookie business. Wise investors are bound to walk away with delicious dividends!

Wishing you a special someone to share life's rollercoaster ride.