Japanese yuzu citrus pucker passion commenced in 710 AD Japan. The Chinese import looks and tastes like a cross between a lemon and a lime. The pungent yuzu fruit remains popular today in Japan.  (Yuzu brightens, and punches up the flavors of both Japanese desserts and dishes.) 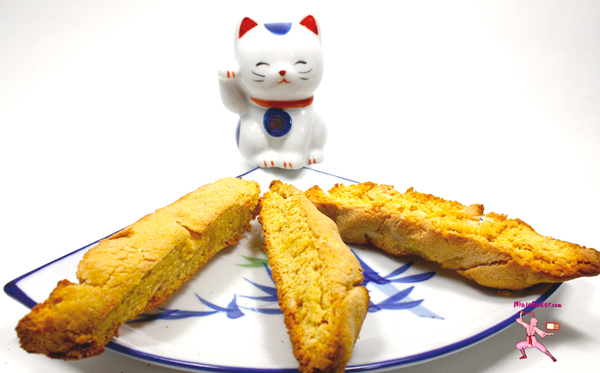 Chocolate – often affectionately called “choco” in Japan – is also wildly popular. Compared to yuzu, however, chocolate is a fairy new commodity in Japan. Milk chocolate made its debut with the Japanese audience in the early 1900s. From my Google Japan and Google USA research, it looks like white chocolate won over the hearts of Japanese girls as White Day was introduced in the 1970s. White Day is an attempt at equal affection expression.  Translation: In Japan, Valentine’s Day is mostly about girls giving boys chocolates. In March, boys present girls with chocolates and other sweet gifts. 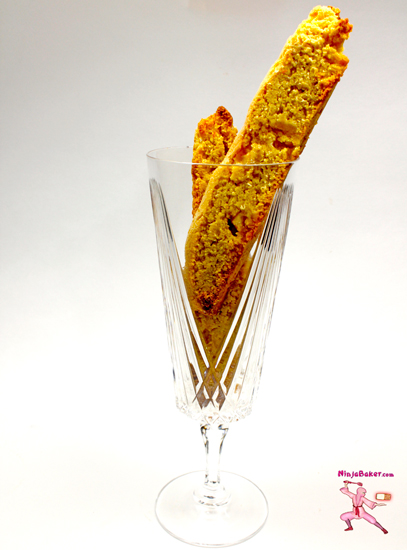 Do you prefer biscotti with wine, espresso or milk?

For today’s Creative Cookie Exchange post - scroll down for details on how to participate – I married the ancient yuzu with the modern white chocolate into blissful biscotti. The classic Italian cookie is made with American cake mix, Japanese yuzu juice and universally loved white chocolate. The biscotto hums in harmony with piquant Japanese yuzu and sweet white chocolate.  Although the biscotti are crisp, they are not quite as crunchy as the traditional Italian cookies. But, the Ninja Baker's Japanese Yuzu Citrus Biscotti are still very yummy. Check out the recipe and see if you don’t agree! 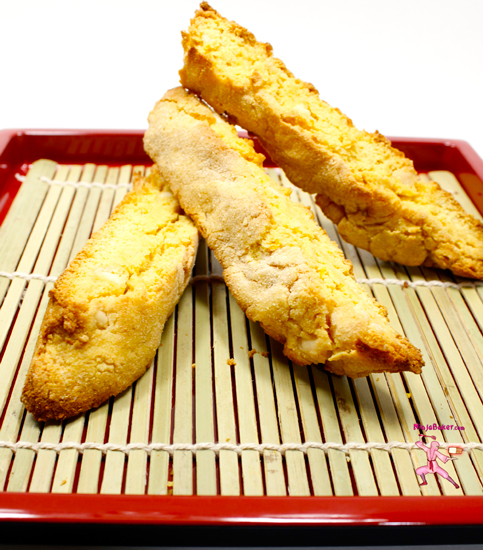 Japanese Yuzu Citrus Biscotti are blessed with the tang of yuzu and the sweet touch of white chocolate. This is one biscotti recipe which produces a blissful yin and yang of piquant and sweet!

Adapted from a Betty Crocker recipe.

The theme this month is White Chocolate! White chocolate is seriously underrated as a baking ingredient--it complements so many other flavors so nicely, like citrus, spices, berries, winter squash, etc. So if you want to see all the ways white chocolate can be used to make terrific cookies, you have come to the right place! If you are a blogger and want to join in the fun, contact Laura at thespicedlife AT gmail DOT com and she will get you added to our Facebook group, where we discuss our cookies and share links. You can also just use us as a great resource for cookie recipes--be sure to check out our Pinterest Board and our monthly posts (you can find all of them at The Spiced Life). You will be able to find them the first Tuesday after the 15th of each month! Also, if you are looking for inspiration to get in the kitchen and start check out what all of the hosting bloggers have made:

Wishing you days as beautifully balanced as the yin and yang of a Japanese yuzu citrus biscotti!