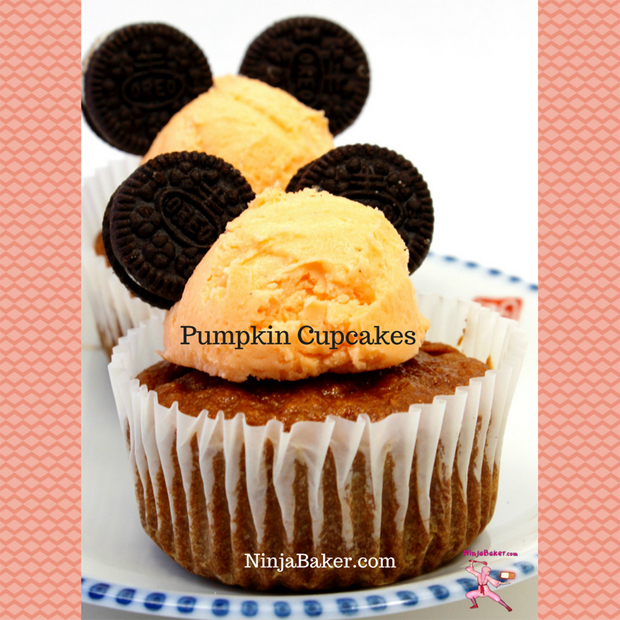 Pumpkin by itself is, well, pumpkin. Add sugar, spice, everything nice to pumpkin cupcake batter and now we’re talking. The apartment takes on the aroma of cinnamon, nutmeg and pie spice getting cozy with pumpkin. 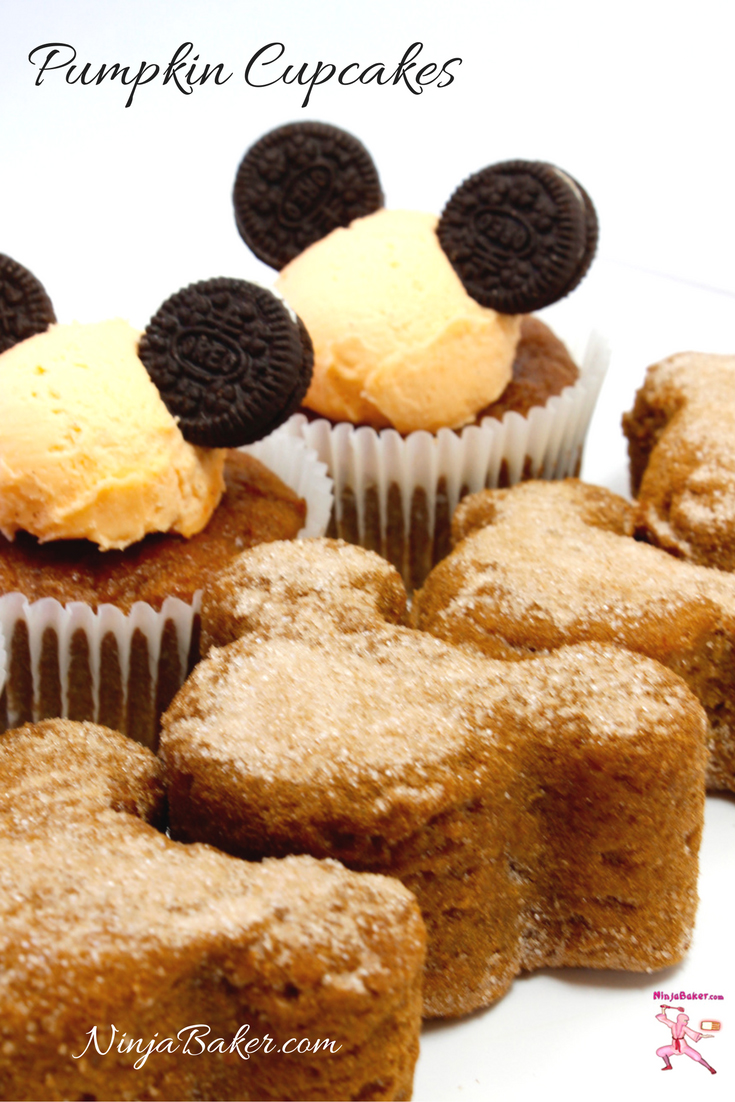 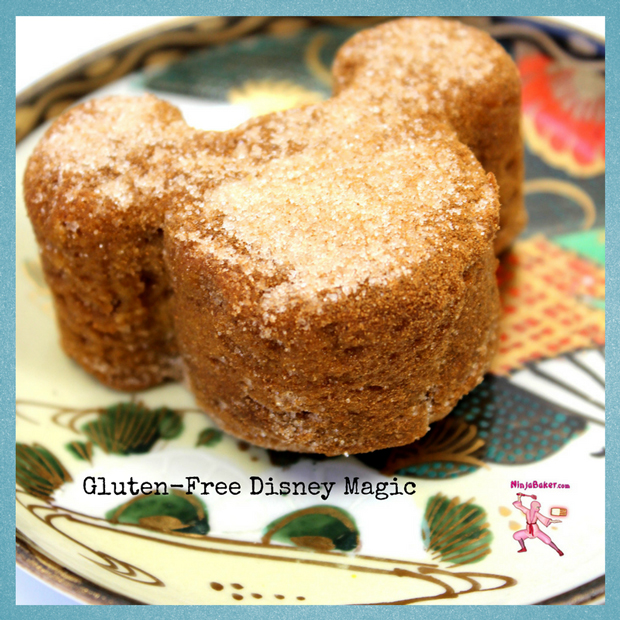 Speaking of magic: Sometimes serendipity steps in and makes Life sparkle again. It was a stressful week. Still, I jumped on Skype to give an English lesson at 10 p.m. My student – a Disney fan – had good news. She was grateful for the CV and application I’d helped her with in previous lessons. In early October, she is traveling to Tokyo to meet a Disney World Florida recruiter! (She wanted to practice English in preparation for the interview.) Of course, the kudos goes to her. But it feels great that I’ve assisted   -  even in a small way  - to make someone’s Disney dreams come true. 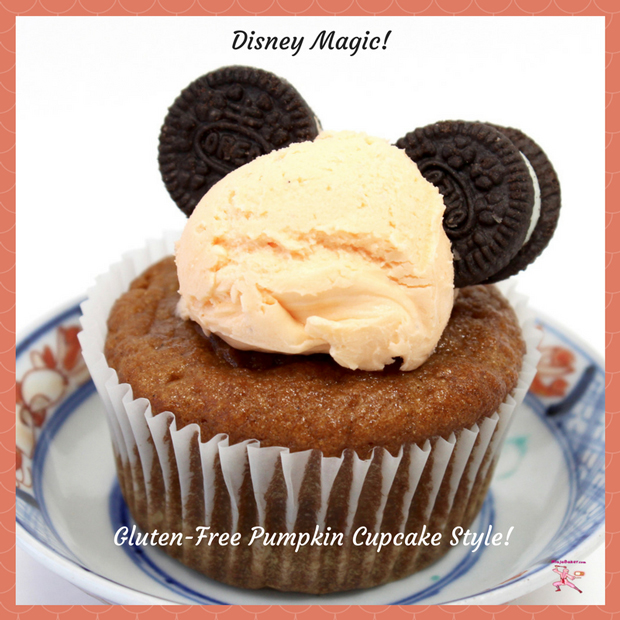 While I can’t turn pumpkin into a coach like Cinderella’s Fairy Godmother, I can introduce you to a seriously scrumptious Gluten-Free Pumpkin Cupcake recipe. Light, moist and kissed with spices, this pumpkin cupcake topped with cream cheese is a dream come true dessert. 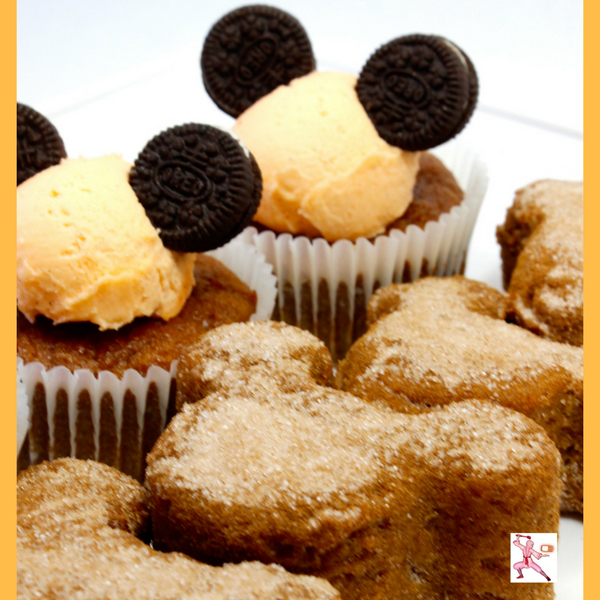 You might think a cupcake with hearty pumpkin is heavy or dense. The magicians at Martha Stewart have created a moist, light pumpkin cupcake. Cinnamon, ginger, nutmeg and a pinch of pie spice add to the warmth of this fall cupcake. As the cake is not very sweet, the cream cheese frosting is welcome.

The recipe is almost the same as the pumpkin cupcake at MarthaStewart.com 1-on-1 Bob's Red Mill Gluten-Free Flour was substituted for flour. Also, pie spice was added to the mixture.

P.s. While the pumpkin cake and cream cheese frosting are gluten-free. Mickey Mouse's Oreo Minis ears are not gluten-free.

1. Preheat oven to 350 degrees. Line cupcake pans with paper liners; set aside. In a medium bowl, whisk together flour, baking soda, baking powder, salt, cinnamon, ginger, nutmeg, and allspice; set aside.
2. In a large bowl, whisk together, brown sugar, granulated sugar, butter, and eggs. Add dry ingredients, and whisk until smooth. Whisk in pumpkin puree.
3. Divide batter evenly among liners, filling each about halfway. Bake until tops spring back when touched, and a cake tester inserted in the center comes out clean, 20 to 25 minutes, rotating pans once if needed. Transfer to a wire rack; let cool completely.
4. Frost with cream cheese frosting: Whip 1 (8-oz) package of softened cream cheese together with 1/4 cup room temperature butter, 1 tsp. vanilla paste (or extract) and drops of orange extract. Slowly add in 4 cups of powdered sugar.
5. Scoop the frosting onto the cupcakes with a mini ice cream scooper. Tuck in Oreo Minis for Mickey Mouse ears.
6. Delcious Option: Combine 10 T fine sugar with 6 tsps cinnamon. Sprinkle onto the cupcakes.

Here's a banquet of recipes honoring the Great Pumpkin for Sunday Supper!