The apple is one VIP in the fruit family. Eve tempted Adam with an apple. Sir Isaac Newton’s wonderment about falling apples allegedly led to theories about gravity. And the Apple logo is now associated with high-tech computers and iPhones! Poet Patrick Blanche even wrote a Japanese-style haiku poem about the firm-skinned juicy-fleshed apple.

One apple, alone
In the abandoned orchard
Reddens for winter.

In Japan, whether it's a mom-and-pop store or an exclusive supermarket, Fuji apples takes center stage. Some apples even have ribbons of injected honey. As autumn rolls around in Japan, city folk pack bento box lunches and head to farms to hand pick apples. (Depending on the farmer, apples are purchased individually or by weight.)

Aomori and Nagano (north of Tokyo) are the biggest apple producers in Japan. Aomori is also home to the world’s largest beech wood forest. (It’s a UNESCO World Heritage site.) So, in addition, to gorgeous Fuji apples, city dwellers are rewarded with breathtaking scenery and fresh air!

Seeds of my musings about apples stem from Heather of Girlichef who chose the autumn appropriate apple theme for October’s  bread baking #TwelveLoaves group.

As I had organic Fuji apple crisps in the pantry, I created a fruity fairy dust courtesy of my food processor. I sprinkled the apple crumbles atop Biscoff slathered on a vegan cinnamon roll dough. (Biscoff is a peanut butter like spread made of scrumptious cookies!)

The recipe below will yield extra frosting. Cinnabon sells extra frosting with their cinnamon rolls. (Not that I’m defensive about additional sugar.)  Speaking of Cinnabon (which I love), this vegan apple Biscoff cinnamon roll is like the restrained grownup version of America’s beloved airport must-have comfort food.

Biscoff is rich so I eliminated the traditional melted butter over the dough. Surprisingly the combo of the sweet Fuji apple bits and the Biscoff did not add any kid style cinnamon roll sweetness. Instead cinnamon was the star. Oh, the roll was still on the breakfast dessert side, but a sophisticated version. (Am I allowed to say that about a cinnamon roll?) The apple bits did give a nice appley texture but not real apple flavor. Next time maybe I’ll try fresh apple. 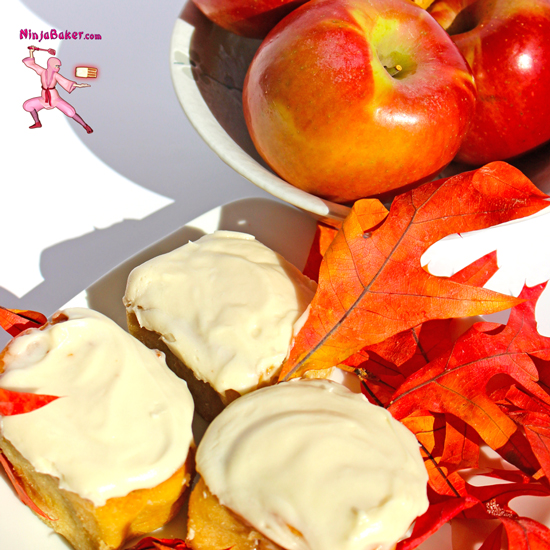 Biscoff and apples do a nice job to create a compare and contrast of soft bread and crunchy filing. However, they play second fiddle to the cinnamon flavor.

Good news about these cinnamon rolls: Besides the fact that they are vegan, the dessert breakfast bread seems to please all ages. A candy-popping teen to hip late-20 somethings to a friend closer to my young age (wink, wink) declared their affection for my Vegan Apple Biscoff Cinnamon Rolls.

Adapted from recipes on the Minimalist Baker.

Melt 3 tablespoons of vegan butter in the almond milk over medium heat. Do not let the mixture boil. The temperature should reach 110 degrees on your candy thermometer and/or feel lukewarmish.

Pour the mixture into your mixer bowl. Sprinkle in the yeast and allow to activate for about 10 minutes. Stir in the salt and 1 tablespoon of sugar.

A KitchenAid or similar heavy-duty mixer will make this next step easy: With the hook attachment in place, gradually add the flours. (About a ½ cup at a time.) Aim to form a ball.

Transfer to a floured board. With flour covered hands, gently knead.

Place the dough ball in a canola oil coated clean bowl. Seal the bowl with plastic wrap. Find the warmest place in your kitchen (or home) and wait one hour. You should see your dough double in size.

Onto a floured cutting board, roll out the dough ball into a rectangle. Slather Biscoff atop the dough. Sprinkle with Fuji apple bits and cinnamon.

Cover your hands with flour and/or wear plastic gloves dipped in flour. Roll up the cinnamon rolls from the wide end of the dough into a log. With a sharp (flour dipped) knife cut the log into 2 inch rolls.

Place the cut pieces into a well-buttered 8 x 8 inch pan. Brush 2 tablespoons of melted butter onto the rolls. Setting the pan atop your oven; preheat the oven to 350 degrees. Once the oven thermometer reads 350, pop the cinnamon rolls into the oven. Bake for 30 minutes or until golden brown.

While the cinnamon rolls cool, whip up the frosting: Cream 8 tablespoons of Earth Balance (or similar vegan butter) with 8 ounces of non-dairy cream cheese (such as the Tofutti brand.) When fluffy add ½ a teaspoon of vanilla extract. Gradually beat in 4¼ cups of powdered sugar. (If you prefer Cinnabon sort of frosting, add more sugar. My friends tend to like a more subtle taste of sweet.) Smooth the luscious creamy frosting over the cooled cinnamon rolls.

If you’d like to add your bread to this month's #TwelveLoaves collection, here’s what you need to do:

Wishing you an abundant autumn harvest of your heart's dreams and desires!